A Message from India 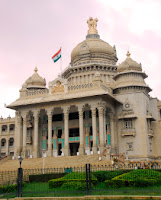 "The future is unknowable and cannot be predicted. A child who joins school today will retire in 2065 and can be expected to live up to the age of 85. The challenge for schools is staring us in the face."  These are the words of Lt. Gen. Arjun Ray, a decorated leader of 's school improvement efforts and now CEO of an independent international school in .  An online friend of mine who works on school change in Atlanta sent me the link to this message from India, because it states so eloquently why schools in the developing world are moving ahead and schools in America continue to struggle.
For one thing, life in , the country that completely jumped over the Industrial Age and took up residence in the Information Age without a backward glance, is not about "test scores."  As Gen. Ray states, "There prevails a lot of confused thinking on what is the fundamental purpose of schools."  Indeed.
Gen. Ray believes schools should have a social objective to play a worthwhile part in the progress of the 21st century, with a "new literacy" that includes competencies in "higher purpose and vision, how to be creative, how to think critically, and how to be lifelong learners."   While schools may say some of these same things, they are not concepts that are valued by a system that prizes test scores above all else.  As Gen. Ray sees it, "Schools should, therefore, look upon themselves as agents of change and not as repositories of knowledge."
Ah, there's the crux of the argument:  What are schools trying to accomplish?  If we are no longer training factory workers for the discipline of standing at conveyor belts for long boring hours, being silent and focused on their narrow tasks, then why are we still running our schools as if that were their purpose?   If we, too, want our students to be creative, to have a sense of purpose and vision, how must we change things to create that outcome?
The person with the best answer to that question is Linda Darling-Hammond, the Stanford professor who originally advised President Obama on education issues.  She was recently featured in a webinar on Edutopia.org, explaining in great detail why the tests our students take now in NO way prepare them for their own futures.
The challenges today, she says require "motivated and self-reliant citizens and risk-taking entrepreneurs" who have a new set of abilities including solving problems, working in teams, creating, innovating and criticizing, reflecting on and improving performance.  These new expectations, in turn, require a major shift in schools, away from the recall and recognition--simple, low-level abilities--that form the basis of our testing programs.
Here's an American test question in science:
1.       Hydrogen and oxygen
2.       Hydrogen and nitrogen
3.       Oxygen and carbon dioxide
4.       Oxygen and nitrogen
Contrast this simple, easy to machine-score "standardized test" question with the "rich task" from a state exam in , :
The Australian exam, and others that Dr. Darling-Hammond cites from , , and other countries, obviously involves a wide range of skills, assessing student competencies in such areas as research and analysis, understanding of ethical issues and principles, lab practices, organization and communication, understanding of biological and chemical systems, etc.  That's why it's called a "rich task" and why, as an assessment of AUTHENTIC work, it requires an entirely different mode of teaching--also richer, more in-depth, more purposeful.

Darling-Hammond points out that worldwide school reform makes such assessments part of a "tightly integrated SYSTEM of standards, curriculum, instruction, assessment, and teacher development."  A SYSTEM designed to train teachers as it trains students to think in creative ways:  The goal for the NEW American public education system.

Posted by Patricia Kokinos at 5:09 PM