What Ike Taught Us . . . and We Promptly Forgot

Why in the world, you ask, would anyone care what Ike taught us, and not a few of you would ask, "Who is Ike?" Indeed. I only came to this thought the other day when I happened upon this graphic, quoting from a speech made by President Dwight D. Eisenhower (oh, that Ike!) sometime in the halcyon days of the 1950s when I was a little kid.  I knew vaguely even then who he was because my father loved telling war stories (World War II, that is) and General Eisenhower figured in some of them.  Back in that day, the Republicans were honorable people who thought that, well, people, were important; the Democrats were the hard-to-sell intellectuals, as Ike's long-suffering but brilliant opponent, Adlai Stevenson, demonstrated. 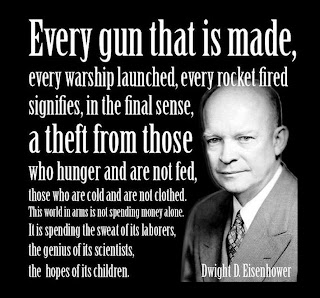 :Those days are long gone, of course, but take a look at the photo at left and read carefully the words and, when your amazement abates, compare those thoughts of a reigning General and conservative commander-in-chief with what the recent election told us the Republicans and Democrats stand for now.  No one among them would dare to voice this anti-military idea in today's world.  It was also Ike who warned us, in his farewell speech in 1961 to beware of the military-industrial complex that would sap our resources and take our money and our attention away from what the people need: hospitals, schools, roads.  These days, the consequences are even more dire:  People right here in America need food, housing, medical care, and still the schools.  Yet the military-industrial complex is thriving, having created such powerful lobbies that the U.S. government is hiring defense contractors, security consultants, yes, even mercenaries, to do what the regular armed forces used to take care of themselves: Take a look at the top twenty defense contractors in this article from Defense Systems, noting that with even a 10% cut (the austerity measures from the Pentagon in 2010), defense contracting would still be the largest market in the world  (Those numbers in the right column are BILLIONS, by the way.).  And that's not counting the tertiary market of arms dealers who spread the "wealth" to developing countries where tyrants and dictators make war on their own people (read a history of Africa for apt and recent examples).
Don't get me wrong.  I am glad to be protected by brave men and women; I'm happy that they have the equipment they need to do that.  I am a patriot of the old school.  But, somehow, over the past half-century, America has witnessed a slow but inexorable slide to the Right, keying off our most horrific decade, the 1960s.  Shortly after Ike's farewell speech, John F. Kennedy was sworn in and all of us who were young then, even if we couldn't vote yet, were enthralled with his optimism and his call for taking action to change the world.   Yet, after the terrors of one assassination after another, JFK, Martin Luther King, Robert Kennedy, a stunned populace faded gently away from enthusiam for change and public service and became enthralled with an emerging narrative, skillfully controlled by those with the money.  (Please read this excellent essay by the prolific history professor Akim Reinhardt, who calls himself The Public Professor, "America's Move to the Right," for a detailed accounting of this trend.)
For those of us who lived through it, the decade of assassinations will always be the critical turning point of the 20th century, in ten years turning a nation thrilled to be moving forward and making change to a nation listening to the Big Lie Technique so well used by Richard Nixon and pretending that things would turn out all right anyway.  The narrative of the ensuing decades became a slow discrediting of "liberalism" (or concern for social programs) and a rapidly escalating celebration of money, culminating in the deification of an actor as the hero of the modern world, President Ronald Reagan.  Again, having lived through it, I am amazed every day that Reagan, who gave us the travesties of conspicuous consumption, the absurdities of "trickle-down economics," and the idiocies of rockets in space can be imagined to have been a great President and a great statesman.  Nothing is a greater testament to the ability of money to control the narrative than Reagan's ascendancy and climactic role as the savior of the free world, an image carefully crafted by multimillionaires who used the simplified world of television to sell messages that made us all feel good about keeping our heads down and spending lots of money.
The point is this:  Those who do not know history are doomed to repeat oversimplified ideas from spinmeisters.  When we talk about the "dumbing down of America," it is not the schools which are to blame, but the facile work done on our minds by 40 years of television and its insatiable need for sound-bites and imagery.  Those who have the money determine what people will see--and ingest and believe.  Thus, more and more these days, I feel like one of the characters from the ending of Ray Bradbury's novel Fahrenheit 451, one of the people who became books, each memorizing a particular text to save it for the world, a scene scarily immortalized in the 1966 Truffaut film of the novel.  In my case, however, I am alone on the desolate shore, telling and retelling my history of the America I experienced, mumbling to myself, no doubt, but looking through the mist for other Baby Boomers and our elders who lived through it all, hoping they will also be saying, "Really, we were there."
Posted by Patricia Kokinos at 3:10 PM